Yesterday before work, I picked up Communion and started reading it yet again. I became interested in the cover art and did some searching online for other work by the artist, Ted Seth Jacobs. In particular, I was trying to find his original (unpublished) cover art for Majestic, which had shown a soldier standing over the body of a Gray. The published version was edited in ways that Jacobs found outrageous, including messing with the lighting (Jacobs' particular area of expertise) and airbrushing out the soldier. I remembered the original painting had been published in an online interview back in the nineties, but it seems to have vanished from the Web since then. In the process of searching, I happened upon his original cover art for Transformation (later briefly used on the cover of one edition of Ed Conroy's Report on Communion), and decided to put it in this blog's sidebar.
So, after spending some time thinking about the art of Ted Seth Jacobs, and his cover art for Whitley Strieber books in particular, I went to work. Mondays are pretty easy for me, as I only have a few classes to teach. When the last one was finished, I came down to the lobby of the school.
In the lobby, there's a small section of wall that has been transformed into a whiteboard by sticking something on it. This stick-on whiteboard surface is now old and cracked, but the kids still like to draw on it. It had been clean when I arrived, but at the end of the day I found that at some point someone had doodled a face on it -- a face that reminded me of something. 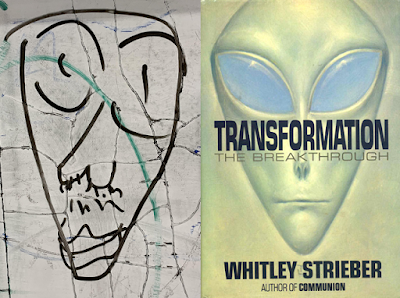 If this had been the result of a remote-viewing experiment, I would have considered it a pretty strong "hit." So what happened? Subconscious telepathy, with the kid "reading" an image from my mind, or just one of those weird coincidences? Or it could be subconscious precognition on my part, I suppose, with my sudden interest in Jacobs' art triggered by the "premembered" whiteboard image. (I am very sure that none of my students have seen my Strieber books or know of my interest in that author.)
This is far from being the first time one of my students has drawn or written something that seemed to have been taken (with some slight distortion) directly from my mind. In one of the most striking cases (recorded here), I had dreamed about writing a book called Pineapples and Apple Pies -- thinking in the dream that the two terms used the same two morphemes in differing sequence, and realizing only after waking that pie was not the same as pine. The day after the dream, my student wrote, for no apparent reason, the word applepine -- explaining when asked that it was "like pineapple but the other way." (Note: This was many years before "Pen-Pineapple-Apple-Pen.")
at March 08, 2021

How the Nazis changed the future, according to <i>The Key</i>

The Key  (originally self-published in 2001; I quote from that edition) is Whitley Strieber's account of his conversation with a mysteri...

Something is happening, and intellectually well-grounded people need not shun it. Instead, the unknown can be faced with clear and open curiosity. When this is done something strange happens: The unknown changes. The enigmatic presence of the human mind winks back from the dark, and a little progress toward real understanding is made.
-- Whitley Strieber, Communion 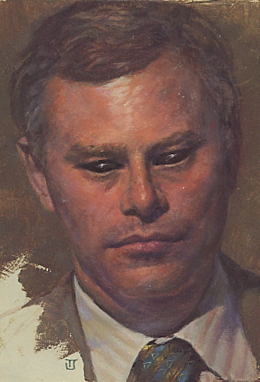 "I painted a portrait from life of Whitley, which I hoped would be used as the cover for Transformation. It was a straight front view, but I painted blacked-out alien eyes on Whitley's face. Again, I thought it was a very powerful image, very scary! And to me, it conveyed the essence of the subject. Whitley bought the portrait, but I was asked to paint another alien image for the cover."

I am an American living in Taiwan, where I own an English school. I have been reading and engaging with Strieber's works since childhood. My main blog is From the Narrow Desert.

Strieber rhymes with Heber, not with Tiber.